More small pieces for 'Bloom'. There will be six eventually based on close up images of hydrangeas, tulips and hellebore. 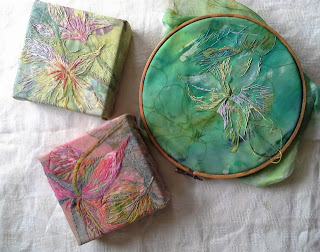 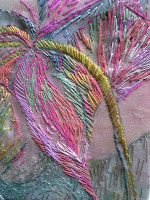 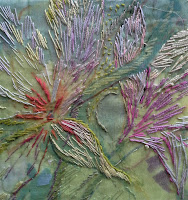 Margaret reports that she is working 'off piste' at the moment for a different exhibition she is taking part in at Swindon Museum and Art Gallery at the end of May. The brief for this exhibition asks participants to explore images from the Museum's large archive of local photographs and postcards in their work.

So far, she has been exploring several different manipulations (in Adobe Photoshop Elements) of photos taken in the early part of last century and chosen from the archive. These focus especially on the Railway Village area of the town. This image, one of several, is entitled Dinner Time GWR works. Sadly no further details are available to credit the photographer.

First of all, the black and white photo was colourised.

This then gave rise to this thought, involving selecting and cropping of the part of the image showing working men walking home to lunch,

and ultimately, after further selecting, copying, flipping and layering, to this possible image.

The original photo gave rise to many thoughts, not least how times have changed from a life which would be unimaginable to us today. The men are walking, presumably home for lunch and not cycling, riding a motor bike or driving a car. They are all wearing suits and bowler hats or cloth caps. There are very clear social class demarcations, with those on the shop floor in cloth caps and the managers and professionals in bowlers. Last, but certainly not least, in the stream of people going home from work there are no women to be seen at all.

Next, for this piece, thoughts turn to what to do with the image, for instance, how much to reference the social class and gender differences identified in the photograph?

*This is the way Margaret says she usually works: having a broad thought of what she wants to achieve, taking or choosing photos from her own archives and then creating a series of digital images and possible interpretations. Later, ideas are further developed with consideration of fabric and stitch.

Posted by Charlton Stitcher at 15:57 No comments:

In these sketchbook pages, Linda shows how she has been gathering a few colourful ideas for our forthcoming exhibition in September entitled Bloom. In these experiments, she has used stitch and various weights of paper, some of it waxed. 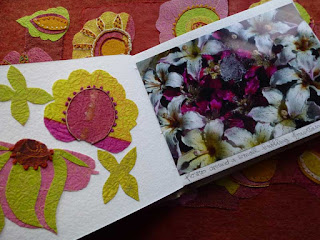 These idea are developments from Linda's many visits to Marrakesh.

Posted by Charlton Stitcher at 15:30 No comments: