Another clip from the Opening Talk of Strand: Textiles with a Contemporary Twist at Bridport Arts Centre, Dorset
Polly Gifford - Arts Director, is discussing the reaction of an Arts Centre Volunteer who would normally find it difficult to relate to 'abstract' work - but, through familiarity with cloth, felt able to respond and engage with the work. (Deer Path, by Liz Harding)

Images from the 'Strand' Private View 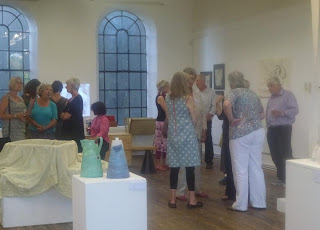 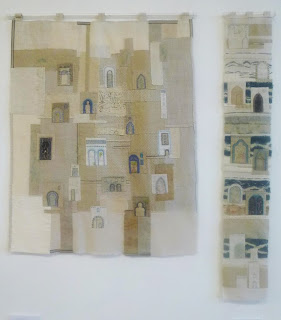 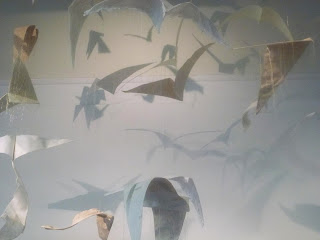 Carolyn's seagulls and shadows
Posted by Liz Harding at 15:07

Strand - our BB Summer Show, is entering it's last week at Bridport Arts Centre! It finishes at 4pm next Saturday 14 September (closed Sunday and Monday), so do take a trip to the seaside later this week if you can - the Arts Centre, the town, the sea and countryside are SO inspiring and creative.
I have a film on show - and thought I would post a little series of clips to give a glimpse of it.
Do visit my blog too - boostitch.wordpress.com

We are now into our third week of the Strand exhibition here at Bridport Arts Centre and the show continues to interest, engage and impress gallery visitors.  As well as being a beautiful show, the work raises all sorts of questions, both directly through the themes explored by the artists, and indirectly by challenging the perception of what it is to be a ‘textile artist’.

This was one of the main themes of the conversation I had with Erica Steer, Director of the Devon Guild of Craftsmen, on the opening day of the exhibition.  We explored the much-visited territory that seems to separate ‘craft’ from ‘fine art’, surrounded by work that clearly shows great ‘craftsmanship’ whilst also being ‘critically engaged’ in terms of its subject matter – all terms that are in themselves contentious.

We heard from many of the exhibiting artists, as well as other artists who were at the talk, about what terms they use to describe what they do.  The main position seemed to be that terms such as embroiderer and quilter had been dropped in favour of the broader terms ‘artist’ and ‘textile artist’, in large part because the other terms didn’t have the respect and regard that the work deserved, rather than a deliberate attempt to claim the right to title of ‘artist’ (although that was the motivation for some).

Its often tempting to say, lets not get too caught up in semantics and just get on with the business of making work.  This was the argument favoured by Erica on the issue of the name of the Devon Guild of Craftsmen, a question greeted with wry smiles from many of the (all female) artists.  Certainly in practice, the Strand exhibition has utilised the accessibility of craft to introduce audiences to different issues and ways of working.  So does the terminology matter?  I can’t but think that at some level it does.  We are a culture dominated by language and therefore the words we use do carry weight and power.

But encouraging more people to see high quality work remains our priority and I want to thank the Brunel Broderers for putting together an exhibition that is doing just that.