Hi - I have just delivered an interesting commission to a care home in Bristol. It is a funeral pall, to be kept at the home, and used when the family come to visit the person who has just died. I hadn't realised (never even thought about it I suppose) but when someone dies in a care home, the body isn't put into a coffin but into a bodybag and is wheeled out, like that, on a trolley. I was impressed that the care home want the visit for family members to be a positive one, so commissioned me to create a pall that would be used to cover the bodybag and trolley. Hope this isn't too much information! 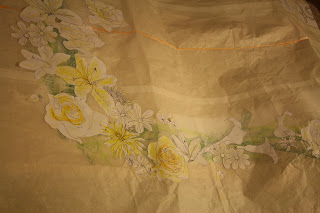 We discussed their requirements (like you do!) - and I produced sketches and an almost-fullsize paper mockup with alternative colourways for staff to consider.
They wanted a fresh design, which was great to hear, but posed quite a challenge when they subsequently chose a rich grass-green velvet as the background fabric. It made sense though, for something that is planned to be used a number of times over the years.

The flowers in this mockup (yellows, orange and browns) were considered by the client to be too strong   >>> 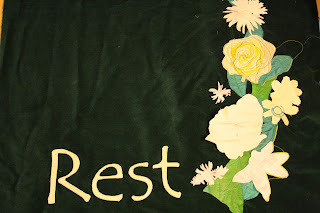 Fabric sample: I had chosen a bluer, jade green for the fabric sample, with cream and warm gold for the flowers, and an informal font for the lettering. Interestingly, once I started work on the final piece, the colours of the flower fabrics didn't work at all - completely lost their freshness and felt dowdy. 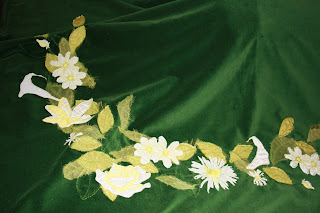 I had to go back to the drawing board and find citric yellows and greens, substituting white for the cream. I also used less solid silhouettes, providing a lighter overall effect. Had to change the font, too, as the staff felt my original choice was too informal. Bit of a pity as I had chosen it to avoid straight lines, which I thought would be difficult to maintain over a large space on the velvet. When it came to appliquéing and satin-stitching these, I Bondawebbed the letters to the velvet. The adhesive just about stayed in place long enough to get the stitching done. The leaves and flowers are appliquéd with a mix of hand stitching and free (straight) machine stitch for a softer, more open appearance.

The whole piece is lined with cotton/polyester furnishing fabric and bordered with velvet, adding to its weight. It drapes well and the cotton velvet is surprisingly forgiving - folds fall out really nicely. I had spent a couple of hours steaming the velvet (on Janet Haigh's advice!) after I completed the stitching, in order to remove the wrinkles and this worked very well.

Now safely delivered and I hope that it will be enjoyed, despite the circumstances of its use.